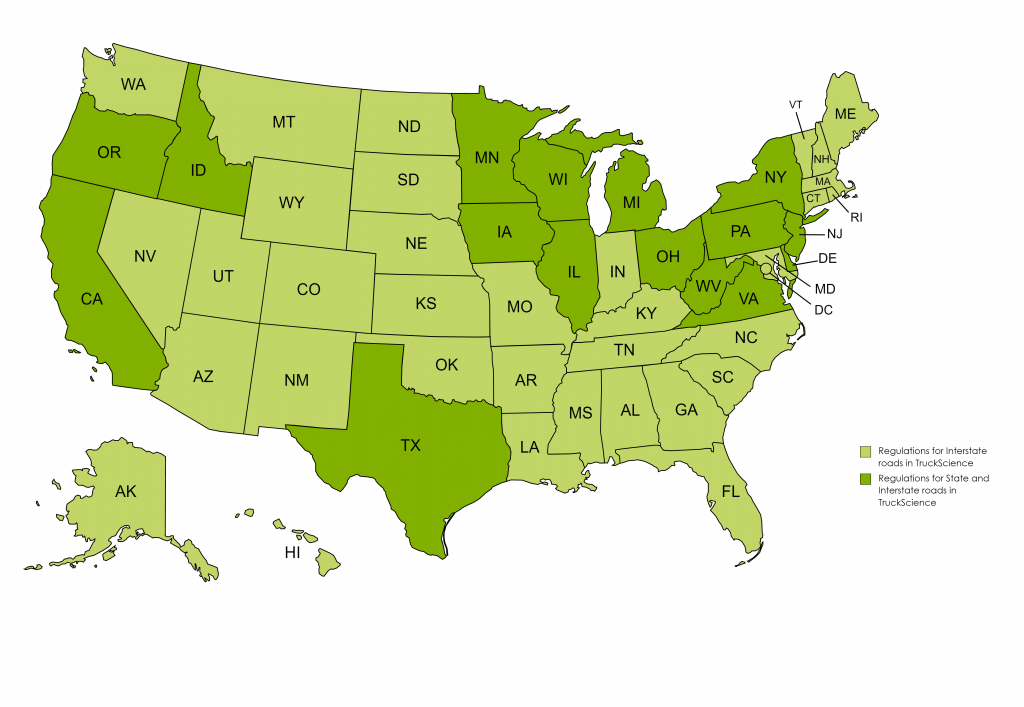 Regulations for State roads in 16 States!

Earlier this year, we added truck size and weight regulations to our Axle Weight Calculator for Interstate roads in all US States.

For us, this represents hours of trudging through heaps of documentation! For you, it means lots more options in the regulations library, and another step towards absolute peace of mind 😊

No rules of thumb

In some cases, restrictions on Interstate roads are more liberal than on State routes. In others, limits on the Interstate are more conservative than those on State roads. There really are no shortcuts! That’s where the TruckScience library of regulations comes in… You choose the states your truck will operate in, and whether on State or Interstate roads in those states, or indeed a combination of both, and the program works out the size and weight limits that will apply.

The program automatically flags if your Federally-compliant combination is not compliant on the State roads in your chosen states, or vice versa.

There are often differences in other length restrictions too, for example Kingpin distance and Trailer length.

Let’s look at a Freightliner Cascadia, with a 279” wheelbase and a 53’ trailer – a typical Over The Road truck combination. While it is legal on the Interstate and National Network, it is not compliant with length restrictions on State roads in Illinois, Minnesota, New Jersey and New York.

While the combination is illegal on State roads in all of the chosen states, the reasons for non-compliance vary from one state to another!

Legal here, not legal there!

Congress enacted the Bridge Formula in 1975, to limit the weight-to-length ratio of a vehicle crossing a bridge. Weight limits are determined by the number of axles as well as axle spacing.

Some states implement their own Bridge formulas on State roads.  In the case of these states, weight limits (for gross weights, axle weights, and groups of axle weights) differ to the restrictions that apply on federal roads, or the Federal Bridge formula.

Iowa is one state which has its own bridge formula for non-primary highways, which allows for higher weight limits.

Idaho is another state which permits straight trucks to be heavier on State roads than on Interstate highways.

Let’s take a straightforward 6X4 straight truck as an example……

The maximum weight allowed on the rear axle group on Interstate roads in Idaho is 34,000lb, and the gross weight may be up to 54,000lb.

If you come off of the Interstate onto Idaho’s State roads however, the rear axle limit jumps to 37,800lb, while the gross weight limit goes up by over 20%, to 66,000lb.

From Idaho to Wyoming

If a truck is to travel from the interstate in Wyoming on to State roads in Idaho, via the Idaho interstate, the lesser of all 3 of the limits above needs to be applied. The TruckScience Axle Weight Calculator takes care of all of this.

Some higher, some lower…

In this example, the gross weight limit for a 6×4 straight truck drops from 54,300lb to 32,580lb when we choose ‘Wisconsin State Roads’ regulations, as opposed to ‘Wisconsin Interstate’. Note how weights for front and rear axles, and total weight are all dramatically reduced.

Interestingly, the 54,300lb gross limit for Wisconsin Interstate is slightly higher than the US Federal bridge formula, which would allow 54,000lb for this combination.

Some both higher and lower…

Michigan is an unusual case, in that travel on Interstate roads under State rules is allowed. This is because the State rules have been grandfathered into the Federal code.  Much higher gross weights can be achieved on both Interstate and State routes when traveling in Michigan.  However, although the rules for State roads allow for higher gross weights, axle weights are generally reduced.

In this example, most axle weights have been reduced to 13,000lb, despite the more than 65,000lb gross weight allowance.

Our team continue to monitor, study, digest and dissect the documentation for both interstate and State roads in all States. More regulations will be added to the Axle Weight Calculator in the coming months. Let us know if there’s a particular State you’d like to see added soon.

You will find detailed documentation, related to truck size and weight regulations for State roads, on the following websites:

Our team continues to add product specs as well as regulations to the TruckScience library. We’ve recently added vehicle specs for

And specs for these trailer, body, equipment and payload items:

These were added at the request of TruckScience users in the United States, Canada, Australia, New Zealand, and South Africa. If there is something you would like to have added to our growing library of specs, just reach out and we will gladly add it for you.

Not yet a user of our Axle Weight Calculator?

Watch this 2-minute video introduction to the Axle Weight Calculator now, or learn more about the program on our Features page.  Or just dive right in and try it for free below!

Read about our partnership with NTEA and find out more about discounted pricing for members here.